Back in my hometown- in the city of Bangalore, on one of the Navaratri seasons I had got myself a figurine of Lord Dattatreya for my ‘Golu’ dolls collection. Regarded as the offspring of Sage Atri and his wife Anasuya, He is regarded as the combined form of the Trinity of Gods in the Hindu pantheon, namely, Brahma, Vishnu and Shiva. Lord Dattatreya is revered largely in the western regions of India and so was it a coincidence then that shortly, I had to suddenly move to the metropolitan city of Mumbai?

Today, on the occasion of Datta Jayanthi, we were fortunate to visit the Datta Temple, located on Mumbai’s Grant Road, just adjacent to the Bharatiya Vidya Bhavan. What is unique about this shrine is that it is open to the public only on Datta Jayanthi – the day the Lord was ‘born’. Dattatreya Jayanthi is incidentally, observed on full moon day (Poornima) of the Hindu month of Margashirsha or Margazhi (mid-December to mid-January).

The temple is enshrined in a charming colonial structure called ‘Anand Kanan’. It was built by a businessman, the Late Shantaram Narayan Dabholkar, a devotee of Lord Dattatreya, who built the ‘dev- kholi’ (family temple) in 1898 and was not intended to be open to the public. Shantaram’s devotion extended further when he also composed over 100 ‘abhangs’ or bhajans in praise of Lord Dattatreya, that are sung in Mumbai as well as in the Dattatreya temple in Sanquelim, Goa. The exterior of the temple is built from stone sourced from Aadityana, a village near Porbandar, Gujarat. Hence, it is called Porbandar stone though locally it is called Makhanio Patthar or butter-stone. As the name suggests the stone is soft and is ideal for carving. The interior of the temple has exquisite Italian marble flooring and Burma teak doors and windows.

The ‘devhara’ or the structure surrounding the God’s statue is nine feet tall and was also designed by Shantaram Narayan Dabholkar. This was constructed in Italy, out of black Italian marble and shipped to Mumbai in nine different parts.  It was then assembled together on its arrival. The idol, however, was made in Mumbai. In 1998, in its centenary year, the temple was restored further and was awarded ‘The Best Restored’ Urban Heritage Society in Mumbai. 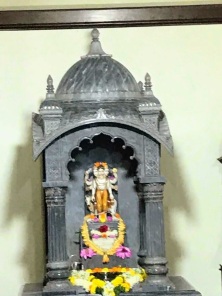 As far as the genealogy goes Shantaram was the younger son of the two sons of Narayan Vasudev Dabholkar, who had a ‘rags to riches’ story in the shipping industry. A road is also named after him in the city near Malabar Hill. Today, Shantaram’s grandson, the octogenarian Satchidanand Dabholkar has been looking after the temple for the last 40 years. Everyday, a pujari comes at 6 am to perform the daily rituals to the deity, and the doors are open to the public on Dattatreya Jayanthi. It was a pleasure to meet him today along with other family members that including the ad guru, actor and playwright Bharat Dabholkar.

2nd episode on Sustainable Living in progress! Guess what the topic could be. I am getting better at Hindi now!
What does one write about these days? Despite some by hiccups, I am grateful if I can work out , have a routine day and if I can pray. The weekly chanting sessions with some of the sakhis has really been invigorating and brought peace to the mind.
Happy Nurse's Day!
Nobody can say for sure!! But the forces that might be gives us pointers. Caution, resilience, patience, empathy, will be the keywords to follow.
#aprayeronmylips #Thirumala
It's humbling to be a mere human being. I hope the larger forces that are at play give us respite.
Loading Comments...
Comment
×
%d bloggers like this: